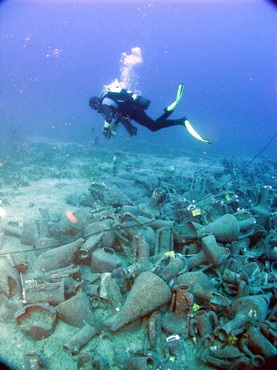 Since 2007, a 4th century BC shipwreck has been investigated in Mazotos area, Cyprus (Demesticha, 2010). Wiley-Blackwell ranked Mazotos shipwreck as a top 10 archaeological discovery for 2011 (check this out !!).

The site lies on a flat sandy sea bottom, in deep water (-45 m), with limited working time for divers. It is the first underwater archaeological project that has ever been undertaken by Cypriot institutions, so the resources are limited. Still, the significance of the site and the dense concentration of the finds in an almost undisturbed assemblage, increased the needs for careful digging and high precision monitoring of the daily excavation. Thus, given this specific nature of the shipwreck, decision was made from the beginning of the project, that a 3-D reconstruction of the site should be the ultimate objective of the mapping process.

A 2010 RIK 1h production documentary (in greek), proved to be both interesting and explanatory, about the wreck, why it is so important, what we do there, and how difficult it is.
Click here, for the point, in the video, about the surveying and recording in 3D

An article about the Mazotos Shipwreck Project, by Anna Demetriou, in the 2nd volume of the Croatian Newsletter, ‘Submerged Heritage’, pp 24-29

For more technical info please see publications.
Some additional material and info may be found on the following links
2014, S. Demesticha, D. Skarlatos, A. Neophytou, The 4th Century BC Shipwreck at Mazotos, Cyprus: New Techniques and New Methodologies in the 3D Mapping of Shipwreck Excavations, Journal of Field Archaeology 39.2, 134-150.
DOI:http://dx.doi.org/10.1179/0093469014Z.00000000077
2010, Presentation in Euromed 2010
2010, Presentation in 7th International Conference on Science and Technology In Archaeology and Conservation Jordan 2010

... or an answer to "what are these people doing with the cameras underwater and why this is better than traditional techniques?"

'Politis' newspaper has a special issue about culture and civilization every Sunday. This week (18.12.2012) the issue was dedicated in Mazotos shipwreck and the research being done.