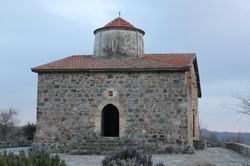 Results were presented in EuroMed 2012

Software development in C++ for 3D model comparison and testing against commercial solutions. Driven by the need to compare the 3D models against different methods, a command line software was developed for direct comparision of 3D pre-aligned point clouds in xyz or ply format (see more). The s/w is available in the d/w page. 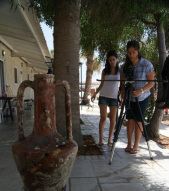 Menci's Zscan is a commercial optical scanner based on trifocal imagery from a known base, to apply scale on the 3D model. It can work in any scale, depending on the bar used.


Results and comparison with similar methods is currently under investigation.

A study based on "whether it is feasible to capture precise 3D models using open source software" was succesful. 200K points were captured an modelled using a cheap of-the-self DSLR camera and a "photogrammetric" layout for imagery. Final 3D model is scaled. Test object, an 1m amphora from Mazotos shipwreck.

At this project a complete 3D 1:1 scale model of a Kouros statue was digitized and created with rapid prototyping techniques. The 3D modelling was done using an innovative (at the time) structured light scanner. More info in the paper the poster or the presentation.