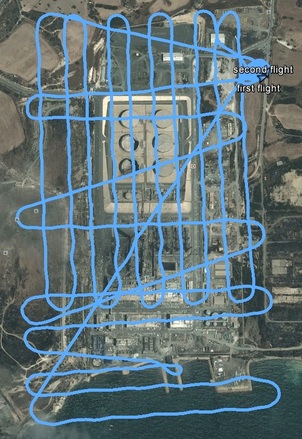 Fixed wing UAVs are suitable for fligt campaings covering larger areas, for instance 1 square Km (Hyyppa, J, 2013). Vasiliko power plant station has been severely damaged as a result of an explosion on the near by military base at 2011 (the crater from the explosion is distinguishable towards the west side of the plant in the DEM and the ortho below). In June 2013, two years later, the power station has recovered completely. Under the collaboration with EAC, under the HawkEYE project, it was decided to act as a test site for as build mapping.
The area was covered in two flights with large overlaps (60%-80% along and across strip). The flight height was set at 250 m above ground level at the take off position (at north east in the figure). The power station has 4 large chinmeys, the higher being 120m. The first flight was designed to photograph the sea shore and for security reasons (ie exhausted batteries) the flight lines were parallel to the sea front and two of them, toward the north, were designed to act as cross strips for the main block. Due to a mistake during the execution of the flight, one waypoint was missed (can be easily identified in the flight lines over the sea), but there no problem in the processing phase, as the 80% side overlap was enough to bridge the gap. The second flight was designed with south to north direction. In total 120 photos were recorded, covering in total 1200x900m.
The photos recorded were processed with commercial computer vision and photogrammetric software, leading to DEM and orthophoto with 0.08m pixel size (see below).

The basic concept of the test is to evaluate which is the optimum distance for GCP collection in corridor surveys, with the final product being DSM and orthophotos of 0.02m ground pixel size. In this particular test, GCPs were collected in regular distances along corridor surveys (of 4 and 6 km) and the bundle adjustment (aerial triangulation) has been conducted using automating tie point extraction and different scenarios of GCPs'. For example the first scenario was held using only GCPs on the two ends of the corridor. The rest of the GCPs were used as check points. At each scenario, additional GCPs were being add in the middle and the remaining GCPs were being used as check.
The research has been applied to the area of Athalassa in Nicosia and to Evagoras Lanitis road in Limassol.

Some videos from take off and landing the UAV

Kick Off meeting on Thursday 20/9

During the meetting the aims of the project as well as study areas were established. As EAC mapping needs focus on corridor surveys it was decided to start from such cases. Large area mapping will follow along evaluation of direct georeferencing.