Comparison of Laser scanning and IBM 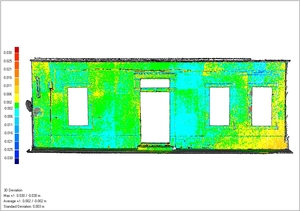 Improvements in Image Based Modelling (IBM) techniques and corresponding algorithms has raised discussions regarding its ability to produce very dense point clouds, comparable, under circumstances to terrestrial laser scanning (TLS). At the same time, IBM is using far cheaper equipment and it is more versatile being able to accomodate any size of objects, for huge to very small. The shortcoming is the need for post processing of data and the increased noise. This work approaches this issue in terms of accuracy, density, methodology and ease to use. Three tests have been conducted to evaluate the process as well as data density, quality, registration and methodology. At the first test a 300mm sphere with texture has been used as a reference object is order to address data quality using image based techniques. Menci's Zscan was tested against the Bundler-PMVS work flow. The second test is a flat building facade, where Zscan, TLS and Bundler-PMVS are compared directly. The last test was contacted in an electricity power station which was an extremely complex structure. Two TLS stations were compared against 212 Bundler-PMVS photos. Quantitative comparisons based on several criteria are presented. For small and medium size objects and distances Bundler-PMVS seems to have an advantage in terms of methodology and accuracy. In large scale objects TLS is better in terms of quality and processing time. The presentation in Melbourne may be downloaded here.

All image below are copyrighted 2012, CUT, D. Skarlatos