Stella Demesticha is a maritime archaeologist, with special interest in shipwrecks, amphoras, ancient seaborne trade routes and economy in the Eastern Mediterranean. Over the past 20 years, she has participated in 15 land and underwater archaeological projects in Greece and Cyprus. Since 2007 she directs the Mazotos Shipwreck project in Cyprus. Since 2009 is Ass. Professor in University of Cyprus.
demesticha [at] ucy.ac.cy 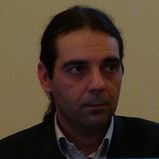 Fotis holds a docent in Interactive Virtual and Augmented Reality Environments from Masaryk University, a DPhil in Computer Engineering from the University of Sussex, an MSc in Computer Graphics and Virtual Environments from the University of Hull and a BEng in Computer Systems Engineering from the University of Sussex. In September 2014, he joined Masaryk University, Faculty of Informatics, Brno, Czech Republic at the position of Associate Professor at the HCI Laboratory
Before (2007-2014), he worked at Coventry University as the director of Interactive Worlds Applied Research Group (iWARG) and as a research fellow at the Serious Games Institute. Previously (2004-2007), he worked as a research fellow at City University for an EPSRC, Location and Timing KTN funded research project called 'Development of Location-context Tools for UMTS Mobile Information Services (LOCUS)' and before that (2002-2004) as a research officer at the University of Sussex for an FP5 European Union funded research project called 'Augmented Representation of Cultural Objects (ARCO)'.
Fotis has contributed to more than 100 refereed publications and has more than 2000 citations (h-index: 22 and i10-index: 38) in google scholar and more than 500 citations (h-index: 11) in Scopus. He has been invited more than 30 times to give talks to conferences and workshops, 90 times to become member of international conference committees and has chaired 17 sessions in 12 international conferences and events. Fotis has secured more than €1,000,000 from a number of national and international research projects. He is a member of IEEE, IET, ACM and Eurographics. Moreover, he is the co-founder of VS-Games conference and has organised numerous conferences and journal special issues
http://www.fi.muni.cz/~liarokap/

Prof. A. Georgopoulos, is Director of the Laboratory of Photogrammetry in NTUA. He has extensive expertise in Digital phototgrammetric surveys and geometric documentation of monuments using modern technologies. He has been involved in geometric documentation of monuments for more than 30 years with more than 125 scientific papers, the majority of which are in this particular scientific field. He has participated in a large number of projects either as collaborator or leading scientist. He is teaching photogrammetry, photogrammetric applications and monument recording at undergraduate and postgraduate level.
During 2002-2006 he was Head of the School of Rural & Surveying Eng. of NTUA. Since 2005 he is Associate member of CIPA Executive Board. During 2006-2010 he was Vice-President of NTUA Research Committee. During 2010 he was Visiting Professor at The Cyprus Institute, Nicosia and following that, during 2011 Visiting Professor at Cyprus University of Technology, Limassol and CyI.
Web page: http://users.ntua.gr/drag/

Dr. Phaedon Kyriakidis is a Professor at the Department of Civil Engineering and Geomatics of the Cyprus University of Technology (CUT), as well as Adjunct Professor at the Department of Geography of the University California Santa Barbara (UCSB) in the USA. He is currently the Dean of the School of Engineering and Technology at CUT, and a former Chair (2016-2017) of the Department of Civil Engineering and Geomatics at CUT. Dr. Kyriakidis was on the Faculty of the Department of Geography at UCSB -- Assistant Professor (2001-2005), Associate Professor (2005-2012) and Full Professor (2012-2015), as well as a Professor of Spatial Analysis (2009-2015) at the Department of Geography of the University of the Aegean in Greece. He obtained his BSc (1994) from the Department of Geology of the Aristotelian University of Thessaloniki, Greece, his PhD (1999) from the Department of Geological and Environmental Sciences of Stanford University, USA, with specialization Geostatistics in the Earth Sciences, and worked as a Post-Doctoral Fellow (1999-2000) at the Earth Sciences Division of Berkeley National Laboratory, USA, where he also held a Faculty Staff appointment (2001-2013).
Dr. Kyriakidis’s research interests include geostatistics, geocomputation, and geoinformatics, as well as their applications to GIS and remote sensing, earth, atmospheric and environmental sciences, as well as public health and archaeology. He has co-authored more than 50 papers in peer-reviewed scientific journals, as well as numerous contributions in conference proceedings and edited volumes. He has co-authored (with Prof. Andre Journel) the book entitled “Evaluation of Mineral Reserves: A Simulation Approach”, published in 2004 by Oxford University Press. He has received a best paper award for his 2013 publication (in the journal Mathematical Geosciences) on efficient simulation of (log)normal random fields for hydrogeological applications, as well as a best paper award for his 2010 conference publication on geostatistical regression for areal data at the 9th International Symposium on Spatial Accuracy Assessment in Natural Resources and Environmental Sciences. He has also been an invited keynote speaker at the 7th International Conference on Geostatistics for Environmental Applications, Southampton, UK (2008), and the 7th International Symposium on Spatial Accuracy Assessment in Natural Resources and Environmental Sciences, Lisbon, Portugal (2006). His research has been funded mostly by the US National Science Foundation, NASA, NOAA, the Greek Secretariat for Research and Technology, as well as (more recently) by the European Commission. He is the Principal Investigator on a recent (2017) H2020 “Teaming for Excellence” Phase 1 project (acronym MedSTACH) aiming at creating an Eastern Mediterranean Science and Technology Center of Excellence in Archaeology and Cultural Heritage; see medstach.eu for more information.

Born in Athens and graduated from the high school of Derveni region – Korinth in 1984. He is a Rural and Surveying Engineer since 1990, and a Dr. Eng since 2002. 1991 - 2002 worked at the NTUA as a doctoral candidate. In 2004 he was elected as Lecturer with scientific activity in the subject of General Geodesy. In 2009 he was elected as Assistant Professor in the subject of Geodesy - Surveying in the School of Rural and Surveying Engineering of NTUA. His research interests focus on topics of Applied Geodesy.
Web page:  http://www.survey.ntua.gr/en/dep/222

Vasileios Fotopoulos is a lecturer at the Department of Agricultural Sciences, Biotechnology and Food Science. He obtained his BSc in Horticulture from Wye College, University of London, and his MSc in Pest Management (Plant Disease) from Imperial College London. He holds a PhD in Plant Molecular Biology from the University of Southampton, U.K. His post-doctoral research was carried out in the Laboratory of Biotechnology of Pharmaceutical Plants at the Department of Pharmaceutical Sciences, Aristotle University of Thessaloniki, as well as in the Institute of Agrobiotechnology, CE.R.T.H., in Thessaloniki. His main research interests include the study of oxidative and nitrosative signaling cascades involved in the plant's response to abiotic and biotic stress factors, the evaluation of priming agents on the antioxidant mechanism of plants under abiotic stress conditions, as well as the study of secondary metabolites with pharmaceutical and antioxidant activity.
vasilis.fotopoulos [at] cut.ac.cy
Web page: http://plant-stress.weebly.com

Savvas G. Loizou received his Eng. Diploma and his Ph.D. in Mechanical Engineering from the National Technical University of Athens (NTUA), Greece,  in 2000 and 2005 respectively. From 2005 to 2007 he was a Post-Doctoral researcher with the GRASP Laboratory at the University of Pennsylvania (UPenn). From 2007 to 2008 he was a Visiting Lecturer at the Naval Architecture and Marine Engineering Department at NTUA. From 2008 to 2010 he was an Assistant Professor at the Mechanical Engineering Department of Frederick University. He joined the faculty of Mechanical and Materials Science and Engineering of the Cyprus University of Technology in January 2011, where he established the Robotics Control and Decision Systems Laboratory (RCDS Lab) with facilities at the Sykopetritis and Ttofis buildings.
Dr. Loizou’s research interests span a wide range of control theoretic issues pertaining to robotic and autonomous dynamic systems and in particular autonomous navigation and control, multi-agent coordination, task planning, human-robot interaction, etc. Application domains for Dr. Loizou's research include undewater and surface vehicles, ground vehicles, aerial vehicles, air traffic management, micro-robotic systems, modular robotic systems, networked robots, etc.
savvas.loizou [at] cut.ac.cy