Participation in the event is restricted to the invited participants at ‘ICT and cultural heritage workshop" on 13-14 December 2017 at the Euroforum Building in Luxembourg. The workshop was organised by the European Commission for renowned expert to take part in a workshop to shape EC proposals for future activities in the Cultural Heritage sector for the next work programme, after the end of H2020.

The second newsletter of iMARECULTURE project, is available.

VirtualArch, is an Central Europe funded Interreg project, who's aims are relevant to iMARECULTURE. Therefore, iMARECULTURE's coordinator was invited to present progress of the project and discuss synergies among there two projects. (Dresden, 27 Nov 2017)

Invitation to present iMARECULTURE project in the General Assembly meeting of BlueMED project, funded under Interreg Mediterennean. Synergies and collaboration among the projects was also discussed. BlueMED could be recipient of the iMARECULTURE's results for VR dry visits. The platform created by iMC, could be replicated/extended to other underwater Ch sites. (Limassol, 15 Nov. 2017)

EVA / Minerva conferences are an established international annual conference for professionals in CH, held in Jerusalem.
During the XIVth Conference, the coordinator of iMARECULTURE, had the pleasure to present the project in an interdisciplinary audience of professionals, project's progress and expected results. (13-14, Nov., 2017, Jerusalem)

Invited presentation about UAV and cadastre, in Department of Land & Surveys in Cyprus

The one hour invited presentation to DLS personnel, about the possible use of UAS, PRAS, etc in cadastre mapping. The presentation was followed with a round table discussion (December 2016, Nicosia)
The presentation may be found here (in greek)

Invited speaker in "Unmanned Aerial Systems and mapping: The contemporary way for surveying, recording and documenting", 25-26 November in Athens. Organized by Hellenic Association of Rural & Surveying Engineers.
My presentation here (in greek)
More info, videos and all presentations, here

The Kick-off meeting of the project has been successfully completed, hosted by Cyprus University of Technology, in Limassol.
Press release, here
Video of the open session and interview of Prof. Selma Rizvic in National TV in Bosnia & Herzegovina
​

International Society of Photogrammetry and Remote Sensing, in the leading international organisation on the field. It is organised in five technical commissions about, Sensors & Systems (I), Photogrammetry (II), Remote Sensing (III), Spatial Information Science (IV), Education & Outreach (V). During the four year Conference, D. Skarlatos was assigned by the General Assembly as co-chair in TCII/ WG9 for Underwater Data Acquisition and Processing. Research Associate P. Agrafiotis of the Photogrammetric-Vision lab, was assigned Secretary on the same Working Group.

Invited speaker with title "Digitizing fragments of our past", 21-22 November 2015, Nicosia

One day symposium, organized by Archaeological Research Unit of University of Cyprus, in collaboration with CUT. Presentation and program (in greek).

A 12 month grant has been attained from HHF, regarding Surveying coastal submerged archaeological sites using UAVs.

"The new version of PHOTOMOD 6.0 comes with the new module for dense DSM. The algorithm of this module is based on the idea, that orthophotos calculated from different images must be the same if the correct DSM is used for orthophoto generation. We call this algorithm iterative deformation method (IDM). When deforming the surface we use special functions to fit building walls and high constructions. Some elements of image recognition theory are also used.", according to Racurs news release.

Two day symposium on 'Applications of GIS in Cyprus'

The Cyprus Association of Rural and Surveying Engineers and the Department of Civil Engineering and Geomatics are co-organizing the aforementioned symposium, on 8-9 Oct, in Nicosia. Two invited speakers will open the symposium: Prof. Georgiadou from ITC (Faculty of Geo-information Science and Earth Observation, University of Twente, Netherlands), and Prof. Kavouras from National Technical Univercity of Athens
For those who would like to sumbit an abstract (the symposium will be held in greek) please see attached document. For more information please visit the site of Cyprus Association of Rural and Surveying Engineers.

Invited lecture in NTUA: "Possibilities and advantages of AUAVs in archaeological site recording"

The lecture was part of class "Monument documentation" on Rural and Surveying School of National Technical University of Athens. Most of the lecture was focused on modern small UAV and their advantages over RC platforms in archaeological sire recording. Fixed wing and multi copters were thoroughly analysed with their flight planning s/w and on board systems. Some commercial systems were rapidly presented. Video of take off and landing pro
Few examples were presented at the end.

Presentation in Greek, may be downloaded here.

The presentaion (in greek) can be downloaded here.

Researchers’ night is an EU initiative that takes place in September each year to promote research and researchers.  In 2011, 800 higher education venues across 32 European countries opened to the public on the same night for an evening of talks, exhibitions and hands-on demonstrations.
EU Researchers' Night website

View some photos and commentary, as published in CUT's news site.

Article in 'Philelefteros' newspaper about the event. 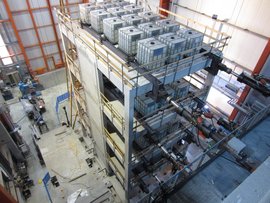 The experiment was contacted by ELSA lab (November 2011) under instructions of Assoc. Prof. Chrisostomou (CUT). Data recording was supported by standard gauges and sensors at 128 channels every 5 seconds. At the same time two cameras in stereo layout were being triggered to capture photos over a specific part of the structure. The approximately 4000 pairs of images will be post processed by ELSA (Dr. Caperan) to evaluate the deformations during the experiment with 0.1 mm raw accuracy (before filtering).
The wall was painted with a pattern to enhance image matching among frames. By using stereo cameras the specific part of the wall is being monitored in 3D and the 3D deformations can be measured, instead of 2D displacements measured by standard equipment. Read more (in Greek) at CUT's 'Inbox', no 6 newsletter.

Preliminary survey on Xilofagou archaeological site with NAS and ARU 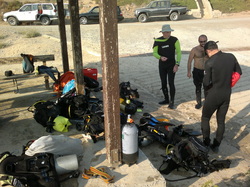 During September 2011, archaeologists from Nautical Archaeological Society (NAS) of UK and Archaeological Research Unit (ARU) from University of Cyprus (UCy) executed a preliminary survey on Xilofagou site. CUT supported the expedition with RTK GPS with up to 1cm accuracy, which was used to record the positions of the finds (using buoys) and their location with respect to the coastline. Data were stored on a small GIS database, as an initial step for systematic documentation in future expeditions. 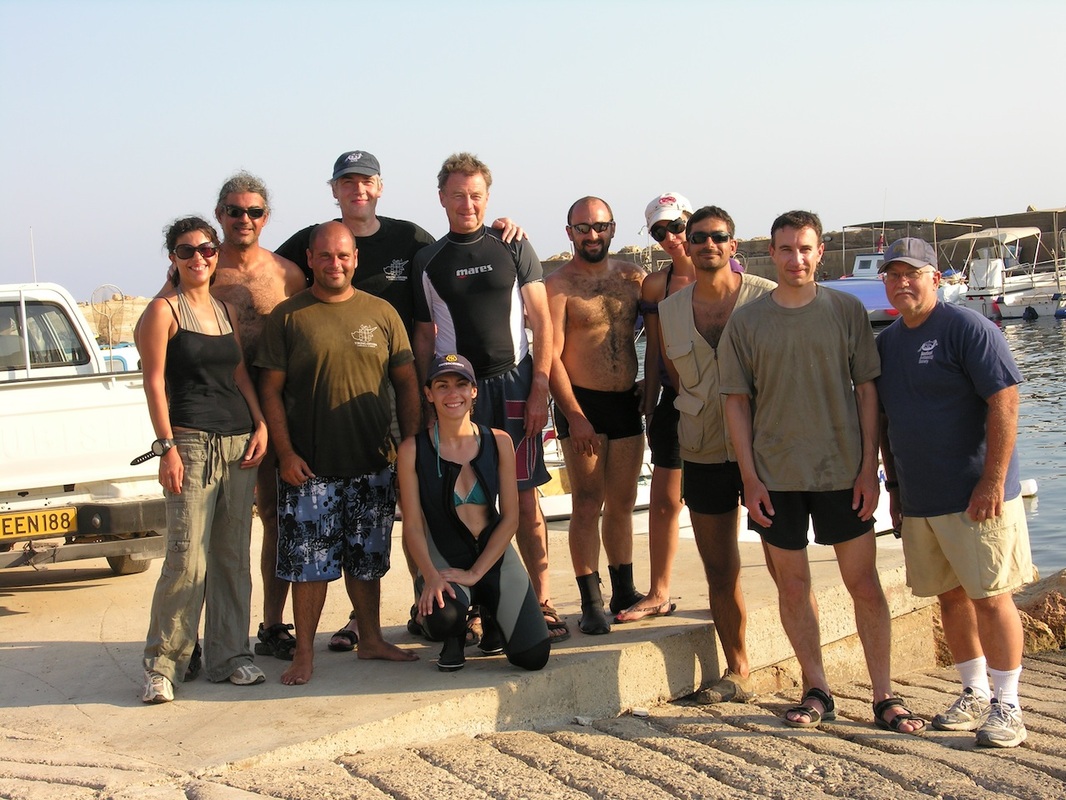 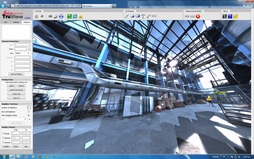 After the Mari explosion, several building in the near by power plant of Electricity Authority of Cyprus (EAC) were severely damaged. In order to access the deformations on the steel structure of the buildings, an initial laser scanner survey was contacted by CUT during Sept 2011.
Deformations in steel rods were reliably detected, and further surveys will take place in other buildings as well. See more...